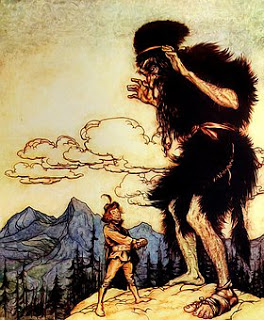 "There were giants in the earth in those days; and also after that, when the sons of God came in unto the daughters of men, and they bare children to them, the same became mighty men which were of old, men of renown." - Genesis 6:4

The word Nephilim comes from the word nĕphiyl (nef·ēl') in Genesis 6:4, which is translated as giant in the KJV Bible.

The Nephilim (giants) were the offspring of the sons of God and daughters of men in Genesis 6:1-4. There is debate as who the “sons of God” refers to. It is my opinion that the “sons of God” were fallen angels who mated with human females. These unions resulted in offspring, the Nephilim, who were “heroes of old, men of renown.”1

Nephilim (Anakim) were people who struck fear into the hearts of the average man. Carol Rose describes them as enormous and terrifying giants. Nephilim were great warriors. They were much taller and much larger than the average Israelite and possessed considerably more strength.2

Postdiluvian Israelites described themselves as "mere grasshoppers" compared to the Nephilim, known variantly as Anakites. Nephilim were giants. The Old Testament, the Apocrypha, Josephus, the Gnostic gospels, and a myriad of other sources all testify to the same.2

We can only attempt to imagine beings that were nine feet tall or taller, with a body weight ranging from 600 to 900 pounds of pure muscle.They were bulked by muscle, gifted with strength. Furthermore, Nephilim were fleet of foot and famous for their quickness, dexterity and adeptness with their hands.2

One need to only reason that such large beings must have been designed and bioengineered differently in order to support such size and weight. We look to Josephus once more for rare insights as to whether or not Nephilim were indeed a mutated form of humankind or just mere sideshow freaks. Josephus indicated theat the countences of the giants were entirely unique from normal human anatomy.2

Nephilim were a very frightening attack on the senses due to their monstrous size and thunderous strength of their voices. In addition, Nephilim were terrible to look upon, just as their serpentine fathers had been, for they both possessed the face of a viper, a snake.2

Josephus placed into the historical record that even the bone structure of giants was unlike that of normal human beings. This must have been for the giants to support their great size and weight. This completely different Nephilim bone structure might explain why contrived scientific investigations attributed to giants as possibly (but not conclusively) being assigned to mastodons or mammoths.2

Josephus went on to state that the bones of those creatures were kept on display up to as late as 70 C.E. Even more startling, living giants were publicly viewed as spectales and wonders in Rome. Posio and Scundilla, a giant and giantess in the time of Augustus, were both 10 feet three inches tall.2

In addition to the Josephus record, giant skeletons have been confirmed by archaeological recovery, Charles Missler, an author and researcher, insisted there is absolute, scientific evidence for tribes of giants, confirmed by archaeological recovery of over-sized skeletons in Palestine. Missler went on to note tall, fair-skinned Anakim and Rephaim were memorialized on several Egyptian monuments.2

The shared scriptural designation among various postdiluvian (after the flood) Nephilim and Rapha. Rapha appears regularly and without coincidence in the David and Goliath story. Rephaim regularly understood as "ancient giants" in the King James translation. Other names associated with Nelphilim are Anakite, Rephaite, Emites, Zamzummites, Horites, Avvites, and possibly even Amorites and Amalekites.2

From examining postdiluvian Nephilim nations, we can reconstruct an accurate picture of the Nephilim appearance. In short, the colossal Nephilim were a race of giants that were tall in stature and mighty in size, strength and dexterity. They were voracious hunters with unending appetites. Their appearance was frightful to the eyes and their sounds harsh to the ears. Nephilim were beasts with long necks and faces like serpents.2

The coming world government will be comprised of devout followers of Satan and descendants of fallen angels and Nephili. They will announce themselves to be descendants of Cain, even if they do not confess to all of this at first. Eventually they will, but it will be too late, for the wrath of God, the great tribulation, the time of Jacob's trouble and the reign of the Antichrist will have already begun, condemning the people of the earth to their destiny.3

Everyone familiar with the Bible knows it talks about angels and demons. But most would be surprised to learn that there’s no verse in the Bible that explains where demons came from. Christians typically assume that demons are fallen angels, cast from heaven with Satan (the Devil) right before the temptation of Adam and Eve. But guess what? There’s no such story in the Bible. The only description of anything like that is in Revelation 12:9—but the occasion for that whole episode was the birth of the messiah (Rev 12:4-6), an event long after Adam and Eve. The idea of a primeval fall of angels actually comes from church tradition and the great English poet John Milton in his epic Paradise Lost.

So if the Bible doesn’t record an ancient expulsion from heaven by hordes of angels who then became known as demons, where do demons come from?

There’s actually a straightforward answer to that question, but it’s likely one you’ve never heard of: In ancient Jewish texts like the Dead Sea Scrolls, demons are the disembodied spirits of dead Nephilim giants who perished at the time of the great flood. This explanation for the origin of demons has secure links in the biblical text, they just aren’t obvious—to us anyway. To an ancient reader, someone who lived during the time of the Bible, this explanation would have been quite clear.

Do you know Jesus Christ as your Lord and Savior? If you think you are already saved, then I recommend you take the Salvation Test, just to make sure. Otherwise, you can learn how to be saved here.


Get notifications of new articles and Daily Inspirational Bible verses by Clicking Here.