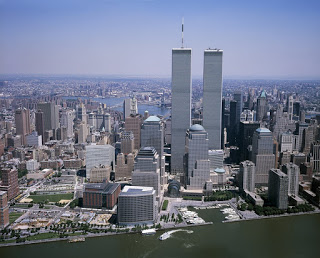 "The kings of the earth set themselves, and the rulers take counsel together, against the Lord, and against his anointed, ..." - Psalm 2:2

9/11 was a watershed moment for me. When I first heard of the possibility that it could have been an inside job, I thought, 'these conspiracy nuts need to get a life.' Out of curiosity, I decided to look into it. I was nearly to the point of walking away, then I came across the third tower in New York that fell on 9/11.

If you are asking, 'what third tower? Only two buildings in New York fell on 9/11', you are where I was then. The third tower that fell was WTC Building 7. It was not hit by a plane, not soaked with diesel fuel, and did not suffer any other major external damage, yet it fell just as the other two towers did on 9/11. Finding the answer to the question 'why did WTC Building 7 fall?' has had a profound effect on my life.

This short five-minute video from The Corbett Report will introduce you to many aspects of the 9/11 conspiracy:4

Insider Traders Knew About Attacks Before They Happened - Right before the September 11th attacks, some fishy business happened within the stock market and insurance firms. An “extraordinary” amount of put options were placed on United Airlines and American Airlines stocks, the same airlines that were hijacked during the attacks. 1

Air Defense Was Told To ‘Stand Down’ - The US air defense system failed to follow standard procedures for responding to diverted passenger flights. Timelines: The various responsible agencies – NORAD, FAA, Pentagon, USAF, as well as the 9/11 Commission – gave radically different explanations for the failure (in some cases upheld for years), such that several officials must have lied; but none were held accountable. How was it possible the Pentagon was hit 1 hour and 20 minutes after the attacks began? Why was there no response from Andrews Air Force Base, just 10 miles away and home to Air National Guard units charged with defending the skies above the nation’s capital? 5

Planes Didn’t Make Twin Towers Collapse, Bombs Did - The World Trade Center collapse appeared similar to a controlled demolition. Many architects and scientists even maintain that a plane’s fuel cannot produce enough heat to melt the steel frames of the two buildings that collapsed.1 Over 3,000 architects and engineers are demanding a truly independent investigation with subpoena power in order to uncover the full truth surrounding the events of 9/11/01 — specifically the collapses of the World Trade Center Towers and Building 7. 6 Knowledgeable experts do not believe the official story.

The Pentagon Attack Scientifically Doesn’t Hold Up - Theorists maintain that the impact holes in the Pentagon were much smaller than a commercial American Airlines plane. They also question why the plane was not shot down prior to impact, as well as why the plane impacted a section of the Pentagon that was vacant due to renovations. 1 How did Hani Hanjour, a man who failed as a Cessna pilot on his first flight in a Boeing, execute a difficult aerobatic maneuver to strike the Pentagon? Why did the attack strike the just-renovated side, which was largely empty and opposite from the high command? 5

Flight 93 Was Completely Staged - The fourth hijacked plane, Flight 93, crashed in Shanksville, Penn. It is believed that the passengers fought back and crashed the plane into a field. Skeptics believe that Flight 93 landed safely, while a substitute plane was shot out of the sky. Other theorists believe that the passengers were murdered, or relocated and will never be found. 1

Hijackers Are Alive. How Did Their Passports Survive Explosion? - In the aftermath of the attacks, passports and identification were found as evidence. Many skeptics question how identification made out of paper survived the same explosion that destroyed buildings. 1

Cell Phone Calls Made From Plane Were Faked - Scientists and skeptics maintain that cell phones could not receive reception from the altitude at which planes typically fly. Others questioned a phone call from a son to his mother, in which he referred to himself by his own first and last name. 1

Black Boxes Found By Search Crew Kept Secret - Three of four black boxes were found and only one was in good enough condition to hear. The tape was not initially released, but was shared with families of the victims in 2002. Skeptics believe the tapes were not disclosed in order to support a secret scheme. 1

Aluminum Planes Can’t Penetrate Steel Structure Of World Trade Center - Commercial airplanes’ frames are constructed with a very light aluminum material in order to make it easier to fly. Theorists maintain there is no possible way an airplane can do as much damage to the Twin Towers as it did. They believe that missiles or explosives were used to ensure the buildings collapsed. 1

WTC Building 7 Collapsed For No Apparent Reason - Perhaps the most damning evidence lies in the bizarre collapse of WTC Building 7. Anyone familiar with the story of 9/11 knows about the collapse of the WTC North and South Twin-Towers. But a third high rise also fell that day. At 5:20 p.m., the massive 47-story steel frame Building 7, untouched by the hijacked airplanes, imploded in the exact manner of a professionally engineered demolition - at near free-fall speed, straight down, and with scientific precision into a compact pile of rubble, barely damaging any of the surrounding buildings. 2

The following video is the 9/11 excerpt from Leonard Ulrich's classic video "NWO Secret Societies and Biblical Prophecy Vol. 1."3 This video looks at the mechanics, the men involved and the motives of 9/11. After watching this even the most ardent skeptic, will be forced to consider the possibility of 9/11 being an inside job.

The Omnibus Counterterrorism Act of 1995, or US Senate bills S.390 and S.761. were two bills introduced by Senator Joe Biden and Senator Tom Daschle on behalf of the Clinton Administration on February 10, 1995. Both bills were never put to a vote, although a significantly altered (watered-down) version of the House bill became law as the Antiterrorism and Effective Death Penalty Act of 1996. Joe Biden has said that the 2001 USAPATRIOT Act is essentially a duplicate of his 1995 bill.7

Following closely on the heels of the Oklahoma City Bombing (April 19, 1995) and Executive Order 12947, prohibiting transactions with terrorists, President Clinton described the bill as a "comprehensive effort to strengthen the ability of the United States to deter terrorist acts and punish those who aid or abet any international terrorist activity in the United States" and requested "the prompt and favorable consideration of this legislative proposal by the Congress."7

Written before the September 11 attacks, and during political debates of the War in Iraq, a section of Rebuilding America's Defenses entitled "Creating Tomorrow's Dominant Force" became the subject of considerable controversy: "Further, the process of transformation, even if it brings revolutionary change, is likely to be a long one, absent some catastrophic and catalyzing event – like a new Pearl Harbor." Journalist John Pilger pointed to this passage when he argued that Bush administration had used the events of September 11 as an opportunity to capitalize on long-desired plans.8

The second two items helped the PATRIOT Act to pass, while the first one was the desired target for the legislation. It will continue to be used against all Americans indefinitely. Liberties lost are rarely ever regained.